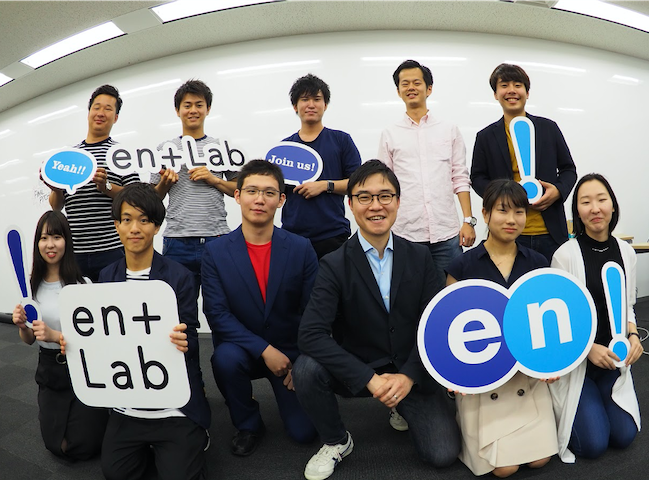 The En Talent Education Foundation has been using ChatBook since 2018. Attracting customers from human resource development schools to chatbots using Messenger-induced advertisements. Chatbots automatically provide a description of the school and guide you to apply for a briefing in a conversational format. The reception of questions after application and communication after application are also completed by chat.

-Please tell us about the business of the En Human Resources Education Foundation.

Mr. Masuno: The En Human Resources Education Foundation was established in 2011 with the aim of supporting those who wish to find employment by Tosaki Ochi, the founder of En Japan and current Chairman of En Japan. Currently, we have three main businesses.

-Among them, Enlab's business is to use ChatBook this time.

Masuno: Yes. Enlab is a school consisting of a six-month program. It is for those who are thinking of starting a business, those who want to take a step forward, and those who want to do something useful to society through business. We have established a scholarship system from the third phase of this fiscal year, and are accepting human resources more widely.‍

-What is your role in each department?

Mr. Masuno: After experiencing ECCL, a department that provides career support for university students, I moved to Enlab to take charge of my current work.‍

-Has Mr. Masuno had any experience attracting customers?

- What is the background to introducing ChatBook?

Mr. Okabe: When I was assigned to Enlab, ChatBook had already been introduced, but it was ChatBook that definitely had a track record from attracting customers to attending classes by looking at the past two customer collection results. The number of 1.5-2 times the number of second-to-100% of other media was achieved.

- What effect did you expect from ChatBook during deployment?

Masuno: To be quick to provide advertisements and information that fit today's consumers. In recent years, consumers have focused on the speed of response that can be obtained by constantly collecting information. We thought chatbots were very effective because they had quick access to what consumers wanted to know, and we expected conversions to grow from there.

Mr. Okabe: We expected to be able to streamline complicated operations and management operations, and create a system that allows us to focus on planning and briefing sessions even in enlab's business operations.

Masuno: We mainly use Messenger-induced ads to attract students. The main flow is from attracting customers to chatting and applying for briefing sessions. In addition, we deliver push messages and dig up information sessions and events for those who have not reached the application.

- You're using push messages, don't you?

The response rate of -10% is a very good figure. What was devised by the message you sent?

Mr. Okabe: I emphasized that the time period and the number of seats will be limited. It was not a sales thing but a message as a reminded person, so if you have a sense of challenge to yourself, I thought that I would participate only in the briefing session. And until now, when holding the briefing session, we had held a group of 5 to 7 people at a time, but this time we held a one-on-one briefing session to focus more on the individual applicant. I think that was also a factor that leads to the application.‍

By centralizing lead management to ChatBook, efficiency was succeeded, and it was twice as effective. How to make use of the limited number of people of two people operated

-How was communication after applying for the briefing session?

Mr. Okabe: Even after I made the application, I continued to use chatbook chat function. There are times when you use e-mail or telephone for emergency contact or selection guidance, but basic communication can be completed by chat. At first, I was worried that there would be more cancellations just by chatting, but I was able to communicate via chat with a natural flow from the application.

Mr. Masuno: Since the name can be acquired automatically on the chat, I think that it was good that we were able to reduce the burden on the applicant even if it was a simple chat that did not enter other detailed information with only the minimum necessary information.

-How did you feel about introducing ChatBook?

Masuno: This time, we only attracted customers through advertisements such as listing ads and Messenger ads. Among them, messenger ads using chat were nearly twice as effective as other ads. In particular, the target matched and highly motivated students gathered. There was no bias in age group, and there were few unauthorized cancellations of applications for briefings. I think that the advertisement using SNS was very much matched to our target.

Mr. Okabe: It was good that there was a very small threshold in the expected value when the applicants came to the briefing. The purpose and direction of the program were explained in advance in the chat, and the scholarship system was established in the middle of attracting customers, so it was necessary to flexibly respond to them. At that time, I was able to respond quickly with ChatBook, so I was able to attract customers in a short period of time.

Also, chatbook's status feature was very helpful in the operation. By changing the status of the applicant by the status, we were able to send messages and responses on an ad-by-case, and it was possible to operate with a small number of people.

-What was the most efficient place to work?

Mr. Okabe: We are now able to improve the efficiency of lead information and progress management. Until now, we used customer management tools and Excel to track lead progress, and all announcements were distributed using BowNow and other means. As a result, managing information became cumbersome, and we were sending emails double and managing them for management. By simply managing it with ChatBook, we were able to centralize information.

-What to expect from ChatBook in the future

Okabe: I think we can take a more effective approach if we have the capability to dig up stagnant leads more efficiently. I'm glad that there is a manual that even people who are not familiar with ChatBook can practice immediately.

The En Talent Education Foundation has improved the results and efficiency of attracting customers by utilizing ChatBook. Chatbooks will continue to support you in responding to each other's expectations and continue to build good relationships through detailed communication.‍

Request InformationContact Us
By clicking “Accept All Cookies”, you agree to the storing of cookies on your device to enhance site navigation, analyze site usage, and assist in our marketing efforts. View our Privacy Policy for more information.
DenyAccept